I hadn’t made Ros bil Laban (Rice pudding) for ages and one morning decided the boys might like it for breakfast so I set about making it and took a video of it in the process.  Here it is for your viewing pleasure, just click on the image below.

My memories of Ros bil Laban (Rice pudding) are vague but I do remember mum in the kitchen making it and every time there would be 6 bowls of it sitting on the bench.  I feel like there was always too much, probably because I was the one who ended up consuming 5 of the 6 bowls, and no, they were not consumed in the one sitting.  But still, over several days it does add up so I don’t think I requested rice pudding often but in winter I am sure it was featured once or twice.  The other thing about rice pudding is that since we didn’t have dessert as such at home (mainly fresh fruit chopped up in summer and nuts or the like in winter) this was the closest thing to dessert for me.  A bowl of creamy rice pudding with my favourite flavour – vanilla! 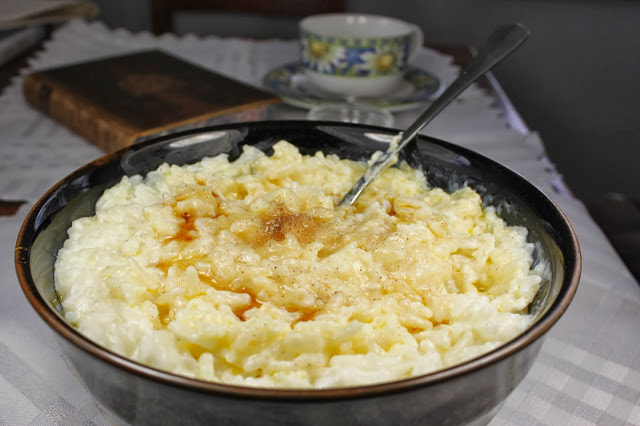 Ros bil Laban (Rice pudding) ingredients It does take time to make a creamy rice pudding from scratch, kind of like making a risotto where you stand at the stove and stir for 20 to 30 minutes until all the liquid has been absorbed.  A creamy rice pudding takes the same love and commitment.  Stir in a big dollop of butter, a generous amount of sugar and drizzle in vanilla essence.  You could of course use vanilla from a vanilla bean and scrape out the seeds and throw in the pod while it is cooking (heavenly) however it may prove to be too costly if you made rice pudding a regular winter dessert. 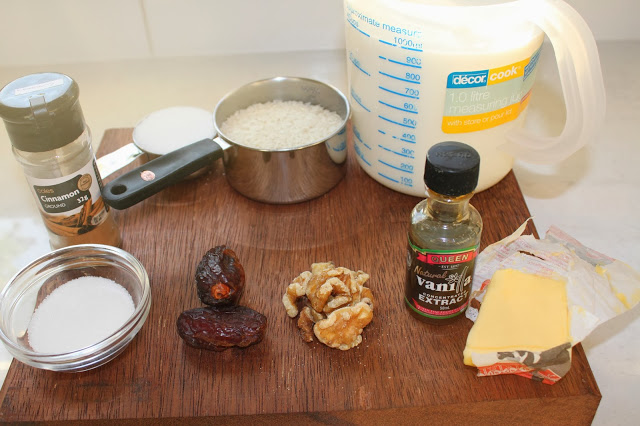 Alternatively, for those so inclined you could omit the vanilla and add in a few drops of your favourite flavour such as cinnamon, coconut essence, almond essence or something like that.  Hmmm, I never really went for anything other than vanilla but coconut or almond sound appealing to me right now. 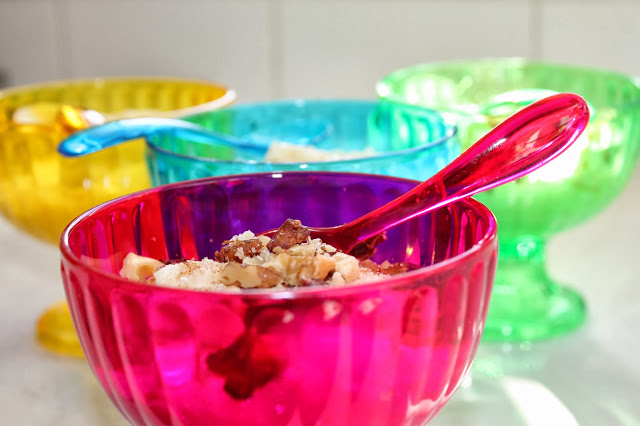 Rice pudding is of course nice just like that but for a bit of texture and colour add some chopped nuts, such as almonds or walnuts, or sultanas as a garnish.  Then curl up with your bowl of rice pudding in front of the television with a blanket over your knees and watch your favourite movie…for the ultimate in a relaxing night in. 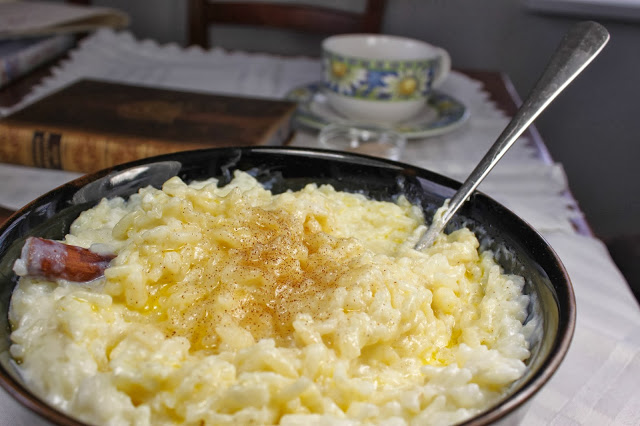 This is the old fashioned type of rice pudding where you cook the rice with the milk, rather than add pre-cooked rice to milk.  The result is a hearty, creamy dish.  We used to eat it at home for breakfast, or as a snack.  Extra pudding can be place in bowls, covered and kept in the fridge, just warm in the microwave with a little extra milk before serving with chopped nuts, sultanas or cinnamon.

Bring milk just to the boil in a heavy based saucepan over medium heat.  Add rice and reduce heat so that it cooks uncovered at a simmer for 30-35 minutes, or until rice is tender.  Stir the rice occasionally as the rice and milk can burn. Stirring also stops a “skin” from forming on the surface.

Add sugar and stir well.  Add extra milk or water if all liquid is absorbed and rice is still not cooked.  Once cooked and creamy, take it off the heat and stir in the butter and vanilla.  Transfer to serving bowls and sprinkle with cinnamon and extra sugar or top with sultanas and chopped almonds, if desired.