How to peel a Pomegranate, رمان, Romàn

How to peel a Pomegranate, رمان, Romàn
How to peel a Pomegranate رمان Romàn !
I love pomegranates.  The fruit varies in size but can get as big as a grapefruit.  We used to have a pomegranate tree in the backyard when I was growing up and often the pomegranates would split open when they were ready for picking.  Our tree (looked more like a shrub than a tree) was quite prolific too , maybe producing up to 50 pomegranates a year, each with hundreds of seeds (or arils) .  In fact it produced so much fruit that my mum got sick of them and in the end had it cut down!
We never used the fruit in cooking it was just eaten as a fruit just like eating berries, and I loved them so it became my job to sit and peel them and I found it rather relaxing sitting quietly and carefully removing the lovely red seeds .  After getting a bowlful I would wash them and start enjoying the fruits of my labour – literally!  I have since used pomegranates in salads as it looks great to have the bright red seeds through a green salad.  I have also used it to garnish Khoshaf خشاف which is a fruit salad made from dried fruits.
I think that I will have a go at making Pomegranate juice when they are next in season and cheap.  In that case I won’t be so careful removing the seeds.  Just cut them in half over a bowl of water and scoop them out with a spoon.  The white membrane that separates the compartments of the fruit is light and floats on water so it is easier to remove.  I think that the juice would need to be put through a fine strainer to remove the hard centre of the seeds (normally edible when eating whole).  If you have juiced pomegranates before or if you get a chance to try it before me  send me an email and let me know how it goes.  I would love to hear about your experience.
I looked up Pomegranates on ‘Google’ the source of all knowledge (I am kidding) and it says the following :
Ancient Egyptians regarded the pomegranate as a symbol of prosperity and ambition. According to the Ebers Papyrus, one of the oldest medical writings from around 1500 BC.
I assume this is true since it is on Google after all, but even if it isn’t is sounds like good traits to assign a pomegranate. 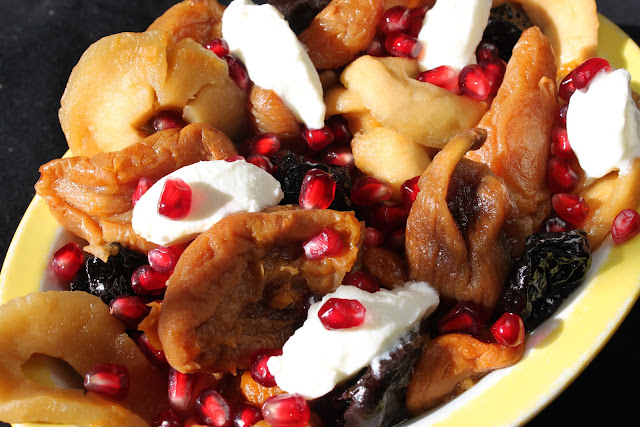 Anyway, back to that tree.  I miss that tree at home.  Now I have to buy pomegranates and they have cost me up to $3 each!  My eldest son was introduced to them from an early age and I remember it was his favourite fruit at 18 months old.  I would take a little container of the seeds with me and it kept him cont ent for ages.
Now that he is a little older he has a keen sense of detection for the fruit in the supermarket or grocer.  He often insists we get one and has thrown tantrums if he can’t have one – on more than one occasion.
We now sit and peel pomegranates together and I must say I enjoy it although more and more I get less and less of the pomegranate to peel.  I dare say that next season I wont be allowed to peel them at all, leaving him with the task if he has his way.  Not a bad outcome really, except that I enjoy doing it myself.  I should mention that the juice can stain so I would wear only the clothes that don’t matter too much and avoid peeling pomegranates over a table with a lovely white tablecloth.  We find pomegranate seeds flying off in all directions and inevitably there are enough that land on the floor for a hunting game.
I mentioned my sons love for pomegranates to a friend of mine who said she had never tried one before but had seen them in the supermarket.  I suggested she try it and then she said she wouldn’t know how to peel it.  I described how I peeled them and got the seeds out but when we caught up next she had brought a pomegranate with her and asked me to show her how to peel it.  I’d say she thought that the fruit was nothing to rave
about but that at least now her kids could try it too.  It was her idea to make a video of how to peel a pomegranate since she thought there would be many other people who wouldnt know too.
So, we did.  Here is a video of one of the many times my son and I sat down and peeled a pomegranate and for anyone interested I hope it is helpful.
How to peel a Pomegranate, رمان, Romàn
Categories:Uncategorized
0 Likes

By Dyna Eldaief in Uncategorized on August 28, 2012

By Dyna Eldaief in Uncategorized on August 28, 2012