Sometimes it can be incredibly hard to find certain ingredients when you need them.  In February this year I spent 4 hours over 2 days making calls trying to track down some globe artichokes.  What a drama.  Wednesday morning I started by ringing the local grocers, two of them.  One didn’t have them because they were out of season – end of story.  The other said try another local store.  That store said try the supermarkets (who did have tinned artichoke hearts but none frozen).  I don’t even know if you can get frozen ones since no one knew of any such thing.  Eventually I rang the Victorian Growers Association.  No replies to my calls for the rest of the day.
Thursday morning. Try again.  Third call to a mobile and finally an answer.  No idea who would be able to supply artichokes when they are out of season.  He referred me to an agent of his who I decide to ring straight away.
Then Samuel woke up.  No, better not risk a phone call when he is awake.  I get him up and give him his bottle of milk.  He is happy playing and Alexander was playing by himself too. Must make this other call.  Off the top of his head the agent knew of a grower in Geelong who could possibly have a few growing even though it is summer and the start of February.  He also gave me a second name, a grower in Werribee but far less likely.  I try the first option and call the grower in Geelong.  The call is funny when I think back.  It went something like this.
“Hi Mike.  My name is Dyna Buntine, I got your number from Geoff who suggested you might have some globe artichokes.”
“No, I don’t”
“I only need them for some photos and then cook them and take some more photos.”
“Oh, yeah I do”
“Really” (I mean REALLY??)
“Yeah, they are about the size of a fist.  How many do you need?”
“Oh, maybe a half dozen or a dozen. This is Fantastic! I live in Melbourne. Do you come into Melbourne at all?
“I come in to the market Thursday and Friday mornings and leave by 7.30”
“That’s 7.30 AM? Right?”
“Yeah”
“Oh, alright, um… Iet me think, um… can I get back to you.  I will try and meet you Friday morning but will confirm.  Um…, what do, I mean, how much do you want for them?”
“Two dollars each”
“Alright, I will let you know.  Thanks for the call…blah blah”
I did end up meeting him on Friday morning.  I arrived at the market at 7.33 and was standing at the boom gate at what I thought was the front.  Seriously, I have never seen so many fork lifts whizzing around.  Orange jackets on everyone.  This place is huge.  The Melbourne market on Footscray road supplies all the grocers, restaurants and supermarkets in Melbourne, so I am told.
I don’t go any further just inside the boom gate and give Mike a call.  Just audible over all the noise I hear him ask what gate I am at.  It takes me a minute to find Gate 3 on a sign on the fence.  He starts to tell me where to go before he stops and says “I will come to you”. Within the next 2 minutes I have one forklift driver stop directly in front of me to ask if I am alright since I look lost.  And then 30 seconds later I get a security car pull up and wind the window down.  The driver asks what I’m doing, then who I work for, then with no satisfactory answer he tells me I am trespassing and shows me the security camera.  I say that is fine I’m not hiding anything.  He tells me he will have to fine me if he gets any more calls.  Not at all concerned I say that is fine, can I stand just behind the boom gate and he says that’s OK.  Before we get any further a car pulls up in front, a man gets out and puts a box of artichokes over his shoulder.  Saved.
Mike and I do introductions on the way to the car and he puts the box in the back on top of the baby pram.  He says $20 will do for the box and we organise change etc.  I was so excited.  The day was still young and I had achieved so much!

1 tablespoon ghee or butter
1 medium onion, chopped
500 g minced beef
140g tub salt reduced tomato paste
½ -1 teaspoon salt
1/8 – ¼  teaspoon pepper
½  -1teaspoon mixed spice
1 vine ripened tomato chopped
1 cup water
12 large artichokes
1 lemon juiced, in half pot of water (for soaking artichokes)
300ml  tomato puree or passatta
½ -1 teaspoon salt
1/8 – ¼  teaspoon pepper
½  -1teaspoon mixed spice
250ml / 1/4  L /1cup water  (or less, as required)
optional : your favourite cheese, grated, to serve.
For the stuffing:
Heat butter in a large pan, add onion and fry over medium heat until golden brown.  Add mince and cook over high heat for 15 minutes breaking up any lumps until it is browned and almost all the liquid has evaporated.
Add 1x 140g tub of tomato paste, chopped tomato, salt, pepper, spice frying for 1 minute then add the water and bring to the boil.  Reduce heat and simmer uncovered for further 30 minutes or until meat is cooked and the liquid has reduced, but the meat is not completely dry.  Set aside.
Prepare artichokes, removing any old outer leaves from the heads and remove the stalks from the base of the heads (or leave a little attached, if desired).  Cut the top ¼ off and remove the inner choke of the artichoke with a spoon.  Cut the remaining leaves with scissors or a knife.  This leaves the artichoke centre or heart.  Brush the cut surface with lemon juice or soak in lemon water (I just half fill a large pot with tap water and add 1 lemon juiced) while preparing the rest as they will turn brown otherwise.
Preheat oven to 180°C (350°F/Gas mark 4).  When all the artichokes are prepared, drain the artichokes from the lemon water and fill the centre of each artichoke with the cooked mince and place into a roasting tray.  Add salt, pepper and mixed spice to the tomato puree (passatta sauce) and pour over the artichokes.  Cook for 45 – 60 minutes or until the artichokes are cooked through. The artichoke should be soft when tested with a fork or skewer.
Serves 4-6. 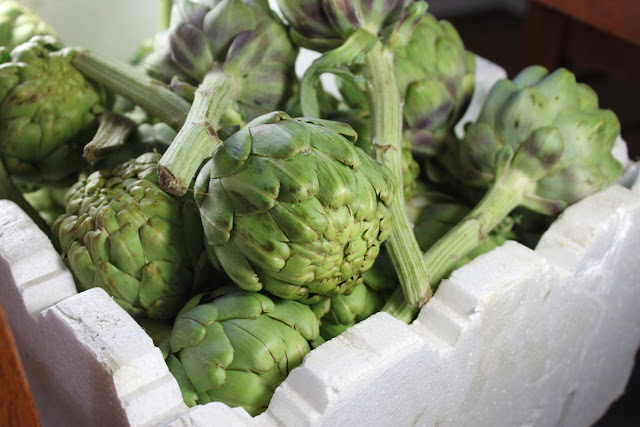 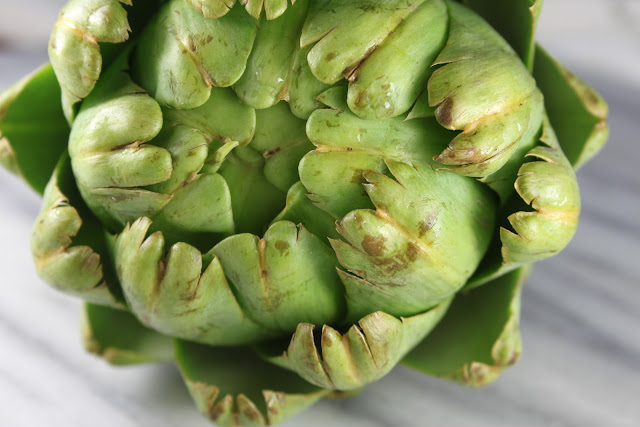 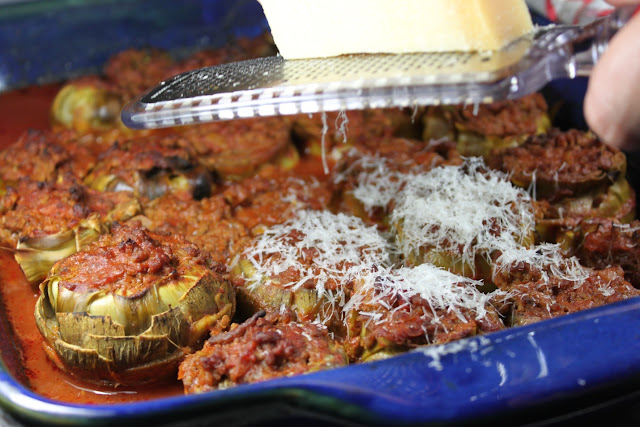