I am sure you have heard of Turkish coffee.  It refers to the process and not the coffee beans used.  Any coffee beans can be used, but they need to be ground extremely finely.  Dad used to sell about a dozen different coffee beans when he had his Mediterranean food shop.  People could come and purchase the beans and have them freshly ground.  I remember the smells.  Some people would combine 2 or 3 bean varieties together and the aroma would waft throughout the shopping centre.
Anyway, back to Turkish coffee.  Arabic coffee uses the same basic method (that is very finely ground coffee) but differs between countries by the addition or absence of cardamom, cinnamon or cloves, giving Arabic coffee a different aroma and taste to Turkish coffee.  Water, coffee, sugar, heat (don’t boil) pour and drink.  Just remember when you make it that you pour all the coffee from the pot into the cups but you don’t drink it all.  Drink the coffee but leave the granules that sit at the bottom of the cup.
I don’t remember ever drinking Arabic coffee although I may have tasted it when I was younger, but I wanted to include it in the cook book and so I got some coffee and a coffee pot from my dad and gave it a go at home.  I know how to make it in theory and I have made it before even though that was probably close to a decade ago.  We have an electric stove which made it difficult to make as the heat is hard to control.  As far as I recall making a cup or two would take a few minutes on a gas flame.  Add 1 heaped teaspoon of coffee and the same of sugar to 90 ml of water in a coffee pot.  Heat to just before boiling point, remove from the heat then repeat and pour into a cup to serve.  It should have a nice frothy head on it, the bigger the better.  On my electric stove it was painstakingly slow.  Almost 10 minutes on the stove trying to heat it up but with the heat coming on and off as it does with electric stoves, it took quite a bit of patience.
I couldn’t prevent my coffee boiling and the bubbles came to the top and then the froth sank.  Disappointing.   Since I didn’t have any more coffee I poured them into the 2 espresso cups I had and took a photo for the book.
When I finished, a bit flat after spending close to an hour setting up, videoing, styling and photographing a cup of coffee with very little froth, Jamie asked if he could have one and I decided to join him and drink one.  It was really nice with a lovely flavour.
On the next visit out to dad’s I think I will procure some more ground coffee and have another attempt at making a coffee that not only tastes good, but that looks good too. 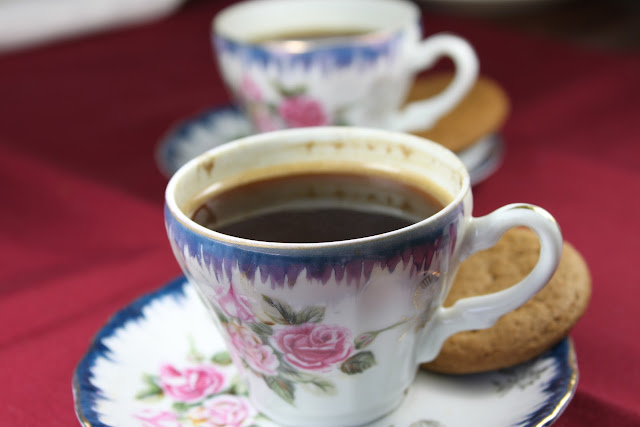 By Dyna Eldaief in Uncategorized on June 5, 2012

By Dyna Eldaief in Uncategorized on June 5, 2012